AT 27 YEARS of age, Clare musician Daithi O’Dronai has already been through more phases of his career than many manage in a lifetime. Developing from a young fiddle player to a reality TV show star, then onwards to a Sony-signed, offbeat-pop performer and finally a unique and soulful dance act, he’s a hard man to pin down.

Recently relocated to Dublin, the man who simply uses the stage name Daithi’s latest incarnation is nevertheless a profound tribute to the rural roots that connect him tightly with the Burren, and Irish landscape.

“When I was writing the pop stuff I was doing my best to write these perfectly little three-minute pop songs,” Daithi explains of his Sony album, and subsequent departure from the label. “I lost my angles. I enjoyed it at the time, but I kind of lost my identity,” he recalls.

The departure from a major outlet like Sony was, no doubt, a tough call, but one Daithi made on the basis that he didn’t feel able to create things with purely commercial aims like radioplay in mind. His next single – a sentimental track called ‘Mary Keane’s Introduction,’ based around a dance remix of an interview with his 90-year-old grandmother – ironically turned out to be his most acclaimed.

“It was a sign,” he said. “The new record leans more heavily into that idea. I was at a point where I wasn’t even sure I was going to keep making music after Sony to be honest. The thing I fell into was the idea that I was working towards a success of some kind. I’ve started releasing what makes me excited after that track. That seems really simple, but it was a revelation to me.”

Daithi’s work is truly built from scratch. More specifically, it’s built from countless, heavily layered building blocks of ambient and atmospheric sounds that he’s recorded across the country. They include anything from the sound of the wind whistling through a gate up a Donegal mountain (a recording that took hours of battering by Irish winter weather, and one that’s his current musical plaything), to the subtle texture of the family fire, or the clang of pieces of cutlery bashing against each other in a rented room in Achill.

He takes these recordings home, isolates the sounds and slowly builds up the layers of texture, throwing in some fiddle along the way, and adding numerous loops to give a form of dance that’s highly innovative in its origins. The mixing process is reproduced live on stage every time he performs. 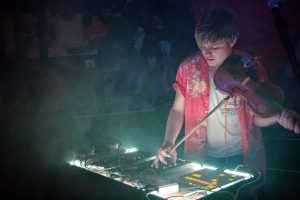 “I’ve been renting AirBnBs for periods of several weeks around Ireland,” Daithi said of his recent recording process, “and adapting them into studios while I’m there. If I run out of inspiration, I just go outside and take a walk and it hits me. I end up with all those elements layered in.”

His current role as a fiddle-yielding, live-mixing outsider artist on a burgeoning Irish dance scene is all a very long way from a start that saw the teenage Daithi compete in the All Ireland Talent Show, and then go on to play Wembley Arena in front of a crowd of 10,000 for Sky’s ‘Must Be The Music’.

While crammed with traditional elements, the current incarnation is also nothing close to trad, but nevertheless could hardly be more proudly and uniquely Irish. “I think my grandfather [acclaimed concertina player Chris Droney, who still tours internationally at the age of 92] might be upset if he saw it my music as trad,” Daithi explains. “He’s the kind of guy who’d get upset if you play a reel at the wrong speed, but he doesn’t really equate the two styles. I think he’s just proud I’m working as a musician, as that was hard in his day, too.”

“I do more than 150 shows a year. That’s what I need to do to keep myself doing this full time, and I’m lucky, as it’s easier to get 150 shows a year from my [solo] set up than it would be from a band. I get rid of everything I use to build my live shows and start against every six months, to keep things interesting. The first couple of shows are always really stressful, but it challenges me, and avoids me getting into a rut when it comes to how I play live. It’s intense, but it’s how I want it to be.”

With his constant push for innovation and love of integrating his field recordings, Daithi has a very real claim to be Ireland’s most unique current performer. Tapping into the very heart of rural Irish soundscapes, he’s bringing the subtly layered and carefully gathered moments straight to the dancefloor.