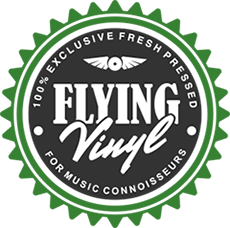 Selling music these days is incredibly hard. It’s easy to see why, too: there are very few tracks you can’t search out online and throw on within a few seconds. There are currently eight albums in the world that lay claim to more than 40 million sales worldwide, and only one of them dates from within my lifetime (Whitney Houston’s soundtrack to The Bodyguard, oddly enough). In blunt terms, selling a record as ‘art’ these days seems a bad business proposition on the face of it.

Of course, vinyl has been a different story over the last few years. Personally, I struggle with 7″s. Perhaps it’s a love of the complete, rounded album, or perhaps I’m just too lazy to flip them over, but I’ve never been particularly drawn to them. Certainly not in the way I gather LPs, anyway. Yet there’s something about Flying Vinyl that instantly grabbed my attention. Perhaps it’s the curation, or the weird delivery system, or the idea of selling albums without telling anyone what you’re selling, and still succeeding.

They seemed like good people to talk about the vinyl revolution with, anyhow, so I did. This little Q&A is with Craig Evans, who runs the place. You can see their two months worth of assorted and impressively beautiful output to date scattered around this post, too.

Let’s start with the background. How did Flying Vinyl come about, and how did you get from concept to a functioning business?

I was just thinking about how we could better connect listeners with new music and I was having this thought whilst holding a copy of Rumours by Fleetwood Mac on vinyl. It felt like if every piece of new music was introduced to people on wax it would be a much more intimate and personal experience and would enhance that connection, so the idea came from that really. We got it from concept to a functioning business with sheer determination. It was one of those companies where we started with the end result and then worked backwards on how to deliver it, which meant a lot of problem solving early on.

What are your backgrounds – are you music industry types?

My background’s in digital marketing in the music industry, my business partner has a range of different businesses but also manages a great band, which is how we ended up meeting.

Whilst vinyl is clearly pretty fashionable at the moment, getting people to pay for music is pretty challenging. You have people paying for music without knowing what it’s going to be in advance. In some senses, that seems an odd formula from the outside. Why do you think it works?

I think it’s a misconception that people won’t pay for music. You only have to look at the amount of people willing to spend £200 going to a festival each summer to see that people are still willing to part with cash to connect with music. The problem really is that music’s become very disposable because of the push towards digital downloading. Now we can listen to everything, anywhere without paying much for it, it feels like the shift in how people spend on music is moving towards experience. Our boxes are a really unique experience both because of the format, the exclusivity of the music and the fact it’s all about discovering amazing new artists, it’s hard to put a price-tag on what that means to people.

You’ve gone for all 7″ format vinyl so far. Is that just the best way of putting forward a lot of different acts?

Yes it allows us to give people a range of different acts each month, as opposed to just one artist that the listener may not like. From a musical promotion point of view it’s also very hard to do anything else when listening to a 7” record, it’s something you make time for and it commands your focus and attention, which is something that’s really lacking in digital content. I like that when we finish and issue of Flying Vinyl I take a copy and have the same experience as our listeners where I turn-off everything in my house and sit down to listen to the tracks.

What is it about vinyl in particular that you love? Is it important that every release is something truly unique?

I’m not old enough to be someone who ever purchased vinyl when it was the dominant format, so I’ve grown up on digital music. I like vinyl because there’s a connection that you have to music on that format that digital music can’t replicate. It’s not disposable, you cherish it and listen to it in the context in which it was made. 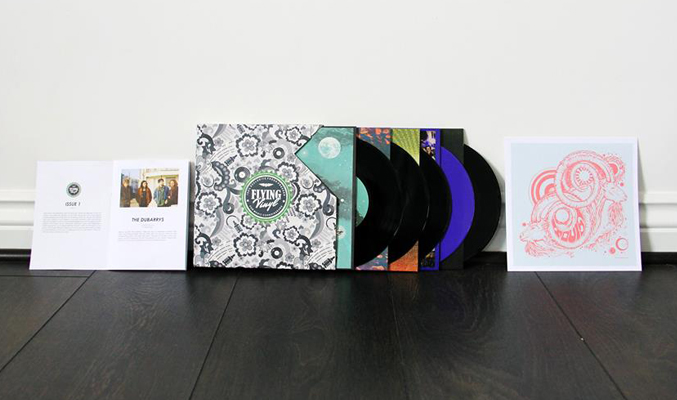 Have you had much interest from abroad? Given your artists are all British, do you think Flying Vinyl could become a little like the old ‘samplers’ for those loving outside the UK?

I really think that if you look at the global music market the UK is the most exciting market in the world. Our artists are breaking boundaries and moving art forward. We’ll take music from anywhere regionally if we think it’s worthy of being in one of the boxes but obviously the crux of music is from the UK. In terms of overseas, we’ve had a lot of interest yes, I think especially in Europe British music is really highly respected and we need to do everything we can to export more of it worldwide and encourage artists to tour overseas more, if we can be a small part of that then great.

Where do you stand on the whole ‘paying for music’ debate that’s raging at the moment?

I’ve spent enough time with artists to know that they’re not getting a good deal out of digital music sales but I don’t think it matters what anyone’s opinion on it is anymore, it feels like that was a debate to be had when Napster hit and really since then it’s mad we’re still having the same discussions. In reality technology keeps on moving regardless of anyone’s gripes about it. I wish we could sell digital downloads for the same price as CD’s but that’s not going to happen and we have to now completely flatten the existing business model and build new and exciting ones that replace those revenue streams. The thing I like about the music industry is that there’re so many areas that are ready for massive disruption and when this happens we’ll return to a situation where there’s more money on the table for everyone. 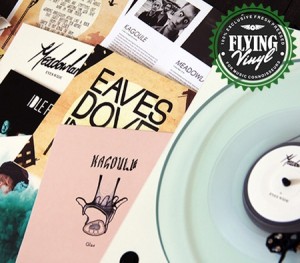 What about Record Store Day – it’s taken a bit of flack over the last couple of years, not least for clogging up the presses. In your view, is it good or bad for the world of vinyl?

Anyone who says Record Store Day is a bad thing is crazy, it’s ultimately managed to encourage a whole generation of music listeners to go back into record stores and purchase something. A lot of those people have never purchased physical music before and are now collectors. How can that possibly be a bad thing in a market dominated by cheap downloads? The frustration for me has been more that Record Store Day used to be very much about what Flying Vinyl’s about, which is getting less well-known artists onto vinyl and encouraging people to listen to something new, it’s a fantastic way to discover great new artists. Now, people are being more encouraged to buy reissued records at highly inflated prices because they’re on a coloured record or picture disc and then half of them end up on eBay the next day, which is a shame. The issues around clogging up the presses really isn’t about Record Store Day, it’s about the industries reluctance to innovate. We have a long history of sitting back and watching tech-companies come along and profit from music without getting a great deal (Napster, iTunes, Spotify etc), right now we need to find a better means of pressing higher-volumes of vinyl to keep up with demand and that needs to be led by a collective of companies. It seems mad that so many people have sat moaning about not being able to sell physical music anymore and then the first hint at which physical music becomes popular again and everyone begins moaning that they can’t keep up with the demand and need to do massively limited runs of everything.

Are labels and artists generally amenable to this kind of project? What kind of reactions have you had from them?

Yes the labels we’re working with have really gotten behind it. Ultimately we fund all of the releases and we’ve found that the bands get a lot out of being in the box in on-going promotion. In the fortnight after each box goes out we see so many people on social media posting pictures of other things they’ve purchased from artists they’ve discovered through Flying Vinyl and pictures from gigs, it’s great.

How do you select the bands that get to be part of this – and how do you work out what your subscribers might be after?

It’s really all about musical merit and ensuring that we’re putting out artists who are at the absolute cutting edge of music. From the point of marketing we ensure that the kinds of people who sign-up are open-minded and want to hear things that are revolutionary and we take music on that basis. We’re about to release our third box and we’ve already put out bands like Eaves, Meadowlark, Theo Verney, Kagoule, The Amazons, Jouis, The Dubarrys, Kid Wave and The Big Moon… There are some serious up-and-comers there.