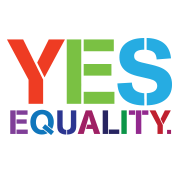 I spent polling Friday feeling angry. I understand that there’s a reason Ireland’s constitution can only be changed by the population (to limit the power of politicians), but seeing people having to canvas for their rights, to debate with Ireland’s greatest homophobes and their endless strawman arguments for the right to be the same as everyone else just upsets me. You should never have to go around trying to persuade people that you deserve rights they already have. The rights weren’t for me, but I felt bitter and jaded.

Come Saturday, with the results pouring in, Helena and I were glued to the radio stations. I spent an entire day digging out results; finding another accepting corner of rural Ireland that had gone against the church and supported the rights of a minority. We talked about almost every result, and I felt my voice quivering when the bigger ones came through. The coverage of events in Dublin Castle made me feel proud, moved and full of hope.

Sunday was when it really sank in. Yes, Eurovision had left me with a mild hangover (of all the days to announce a vote result, they got that right!), but it was sinking in how Ireland had changed in my eyes. I felt ecstatic. I thought of my gay friends, and of a quiet promise of an engagement should the referendum go I’d heard a few months before. I cried, lots, with pure happiness. And it’s been a long time since politics has made me do that.

I’ve come to expect the worst, politically, living here. Ireland’s a wonderful place, but I arrived in 2008. I’ve only been here for the lows: the economic collapse; the spectacular failure to really hold anyone to account for it; the mass job losses and the anger that came with them. Social welfare for the masses, housing tax, water bills and protests. At times, Ireland’s seemed like a living incarnation of Murphy’s Law populated by the most fantastic and unfortunate people ever.

I love it here, but I didn’t grow up with church influence, with borderline-acceptable cronyism (yes, we had it too, but not like in Ireland) or with pandering to the rich in courts. I’d lost hope when it came to the politics and didn’t feel the need to take part. Never has my opinion changed so much in a few days.

The fact remains, though, if this was all we needed, I wouldn’t be bothering to look at citizenship.

There’s lots more to do…

“In Irish politics, it’s safe to say anything that’s unanimous is a gesture” – Fintan O’Toole.

The marriage referendum was not a gesture, but it didn’t ‘cost’ politicians anything, and very few went against it. If there had been costs, I suspect there would have been more dissent. The battles ahead will be tougher.

Sometimes, Ireland can seem like a surreal dual world to me. Living in central Dublin and being surrounded largely by the young and outgoing, this country can seem an incredibly liberal place. I know, however, that it’s a distorted effect.

Almost everyone I know (that I’ve ever discussed it with) would like at least some level of liberalisation of Ireland’s abortion laws, which are painfully stringent, especially in some very controversial areas such as fatal foetal abnormalities (essentially, the baby’s certain to die, but the woman has to carry it anyway), or after a woman is raped. Personally, for what it’s worth, I’d like abortion to be easy to access up to a certain reasonable point in the pregnancy, but I recognise that’s unlikely in the short term here.

Absolutely everyone I’ve ever spoken to about it would like the blasphemy law withdrawn, and most see it as an absolute affront to freedom of speech.

Most would like the church withdrawn from schools, and their option to discriminate based on a child’s religion offends me hugely. I know people who’ve christened their children in order to make their schooling options easier. I understand their reasoning, but I won’t be pushed into declaring my child for a certain religion against my will; it’s a simple principle and I intend to stand for what I believe. I sincerely hope my child doesn’t suffer, but nothing will ever change if we all tow that line. It’s worth remembering teachers can still be fired for ‘not upholding the ethos of the school’ if a Catholic school learns they’re gay. Gay people are still a long way from equal in this country.

It’s fair to say that amongst my circle – the generally young and liberal – the approval of same sex marriage was an emotional moment, but also a first step on a long road. While I don’t claim to speak for anyone but myself, from where I’m standing we have a shopping list, and it’s time to follow through and do what we can to create a true republic.

It sounds so obvious, but if you’ve lived here in Ireland through the marriage equality debate, you’ll have heard the extremity of some views expressed around it. People have the right to vote whatever way they deem right, but to denigrate single parents, throw out red herrings galore and find any way around just outright saying ‘we don’t like the gays’ that might seem faesible is atrocious.

My own scenario, and the appeal of citizenship

I currently qualify for Irish citizenship by a number of criteria: I’m married to an Irish woman, I’ve lived here over four years (the minimum residency cut off) and I have an Irish-born son who at present holds only an Irish passport. Hell, if I was half as good at football as I’d like to be, I’d probably just about qualify to play for Ireland by the granny rule, too (I have two Irish great grandparents, which arguably makes my grandfather Irish).

I haven’t been all that interested in citizenship up until now, though. Mine is a strange set of circumstances. As a British passport holder and resident, I’m already entitled to vote in pretty much everything but a constitutional referendum. My passport entitles me to live and work here indefinitely. and gives me almost all the rights of someone who was born here.

It’s also pretty costly to become a citizen. It costs €175 even to put in an application, and should you be successful (and while there’s discretion, I have every reason to believe I would be), a further fee of €950. That’s the kind of money I’d normally reserves for the mortgage, childcare, or the occasional holiday, and it’s not like I have it sat around to spare.

But then you look at the above list, and it has to become a consideration.

I’ll always be limited on what I can really achieve here, in terms of political change. I write letters to my locals TDs when something particularly moves me. I’ve played very (and I emphasize very) minor parts – attending events, debating on social media, etc. – in both the campaign to Repeal the 8th amendment after the death of Savita Halappanavar and the vote for marriage equality.

You don’t need to know much about Irish history, though, to know that for a certain number of people, having someone campaigning for something with an English accent is not a convincing argument, no matter what the actual substance of the discussion. I get that, and it’s enough of a reason not to campaign all that much in person. It’s the very real reason why I didn’t knock on doors this time around.

But perhaps it’s worth spending over a grand for the right to express my opinion on this stuff? The people who came home to vote moved me. I’m sure they didn’t spend much less, and in their heart of hearts I think they knew that the referendum was already won.

€1125 isn’t more than I can afford, at a push, though it is significant. It would involve sacrifices, in the form of notable lifestyle changes for a few months at the very least. I’d also have to go through the strange process of explaining to anyone and everyone who’s curious just why I’m now ‘Irish’ (I’d actually be a dual citizen; that’s a very easy process when it comes to the UK and Ireland).

It’s not an easy call, but it seems a nominal sacrifice to make next to those who’ve been deemed ‘lesser’ for so long, and those – many both straight and no longer even residents of Ireland – who went above any beyond just to make absolutely sure that that minorities got the rights they deserve.

I’ve lived here since 2008. In a few months times, I’ll have spent twice as much of my adult life in Ireland as I have in the UK. Every serious job I’ve ever had has been in Ireland; it’s here that I married, here that my baby was born, here that I bought my house and here that I live my life.

When it comes it citizenship, the real question, increasingly, is when it comes to spending a grand to be part of it… can I afford not to?

Grace Petrie: “the most authentic art tends to be the most powerful, in my opinion”