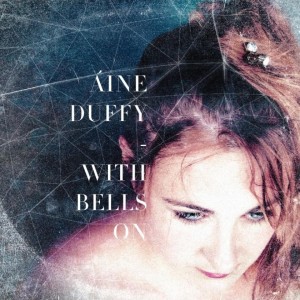 Maybe it’s the slightly Spanish twang of her guitar track on the intro to ‘Won’t Go’. Maybe it’s that harrowing video drama (below). Most likely it’s just the voice… Whatever hooked me, it took about one track.

There’s something fantastically refreshing about west Cork native Áine Duffy and her brand of…erm… flamenco dance-pop? Whatever this is, it’s sassy, dramatic and poignant, and you should listen to it. I caught up with Áine to ask about her album ‘With Bells On’ and find out what she’s all about…

Hi Áine. Let’s start with the obvious. You have a seriously unique voice. What’s your background, vocally?

I have always just sang with my own voice. Maybe not knowing who Eddie Vedder was when I was younger helped! I feel it gives you more scope to be honest and hit more notes. Putting on any accent restricts you. Singing is an art form, a form of expression, so I love to hear the original accent of a person, it should be the only way.

I sang anywhere I could, especially in the car! I went to a convent too for 14 years, but they were not encouraging to me at all. They had lots of musicals and I wanted to be on stage. Still, I loved AC/DC and played gigs of all kinds of cover songs when I was 15, all the way throughout college. I made my own versions of things, and had to learn whatever songs were shouted at me from the audience. I was like a little juke box.

Do you find its more of a challenge breaking into the Irish music industry when you come from a relatively rural corner of the country? Are we too ‘Dublin-centric’?

Well sure, we are a little Dublin centric, I’d be lying if I said other, seeing as of all the controversy there is. I understand though, it’s the capital!

I love Dublin and driving up and down and staying sometimes, but the reality is, I write my own stuff and can make a lot of noise as a neighbour.

If someone said I had to stop playing the guitar at ten o’clock at night, I would be a little disappointed to say the least.
So the countryside is better for me. I’m sure there is plenty bands in Dublin who would love to have a beach and peace and quiet, but need to be in the big smoke because of the opportunities, and sometimes one would not even be considered for a project because they do not live in the city, but hey, its only a trip in the van and a small country after all!


How is the Cork music scene in general at the moment?

I have always loved the Cork music scene. The people coming to gigs are less inhibited, and we produce great bands, but not being in Dublin it is harder for them to meet industry folk or get those opportunities that a Dublin band can get.

The music scene in Cork is friendly, way less competitive. I don’t think music should be competitive at all! Sure we all love music and go home and listen to music at night, these fecking TV competition things are joke on real musicians/performers. If someone is good, for us, we are generally happy for them.

Your last two videos in particular are absolutely crammed with personality. Do you come up with the video stories alongside the tracks?

Well, I have a similar view on videos, videos should be an expression of the artist. If you sings based on your own views and passions, videos can be made reflecting this.

I did one video in NYC with Chis Cassidy. He saved me then, I needed a good video and the day before I was leaving. My friend in NYC, Hagai, said to Chris come on, lets help Áine she needs a video. He called me and followed me on the last day.

On This particular day, I was putting a show on the roof of our building (475 Kent, an iconic building in Brooklyn) for everyone, to say thanks for all the encouragement and inspiration they gave me, and gave them beer and a show.

Chris literally followed me! It got most viewed video in Ireland the week I put it up. NYC showed me its more about your personality, than LA where it was about how much you weighed!

Lots of video companies you have here charge a lot of money and get carried away. My landlady and friend introduced me to Maurice Supple who lives close to me. He is a legend. I want a video person who is not afraid of the rain or dirt or reality! Maurice is the man. He caught all the reality. I see what is around me and I figure out how I can make an awesome video from the “Art of asking”. [my review of Amanda Palmer’s book is here – James]

My friend called over one night (the dancer/actor in the video) Dale Coleman and said “right how do we do this.” We put our heads together and things started happening. I like people who are not “all talk no action.” Inma Pavon, the beautiful dancer in my video from “wont go” I have known for years and years, we used live together in Cork city. She was delighted to be in the video, and I was ecstatic to have her! Maurice was soaked with rain for the first video, and covered in talc and flour for the next!! He has a great mind, and can go with the flow like no other, what a legend!

The album’s out now. What you tell us about it?

I want to make another already! It’s a dance EP. I have plenty tunes and love grooves and electric stuff, so hopefully I can get straight on it!!

Can you tell me a bit about the recording process, and how the album’s come together?

I recorded the album with Willem Blok and Stano. It was a great experience for me to learn more about myself and what I am capable of. We recorded all vocal and instrumental takes live! All full takes.

Finally, somebody catching how I sound onto tape. Obviously using great mics and a splitter too as I have a large range. Recording my vocals in one take was perfect, it captured the story and the natural progress of expression.
It mostly happens when you go into a studio, they make you repeat the chorus or verse over and over etc. But I’m telling a story and telling the beginning , middle or end over and over and it doesn’t feel as real! I got confidence in my guitar playing too, and its making touring great as I know the parts pretty well!

How did you find the TwoTube experience? Did you feel you had to ‘adapt’ to a TV audience?

We really enjoyed it, I am currently playing with ” The Hypnotyst,” there are just two of us, so things are much easier. We had to play acoustically even though its currently fat beats, electric guitar and keyboard. It did not phase us, see if you are being yourself it’s not problem. It’s not like acting then so no pressure, and I am who I am, it’s up to whomever to decide if they like it or not. We all have our own taste.

You’ve played some incredible shows around Europe and North America already. How did those come about? Has it surprised you how well you’ve managed to do abroad relatively early in your career?

These came about about cos I’m hugely driven and ambitious and keep trying. It wasn’t easy doing any of this, but I grabbed the bull by horns and left the county to see if the crowds genuinely liked me. I have played so many free shows you wouldn’t believe!! I played night after night whenever wherever I could and passed out mailing lists and talked and thanked everyone for coming. I still hugely appreciate these people.

Sure every job is hard, most professions have you working for years before you start getting respect. At least I enjoyed nearly every minute of it, if not I’ve some pretty good stories, and learned from my experience.

I hear in Switzerland they loved you so much they started throwing guitars at you… what happened there?

I met a lovely friend in NYC, her dad started to get into my music, in Switzerland. he is an aeronautical engineer with great taste in music and guitars!

I was flown over to play a private party and yes, sent home with a guitar, then flown the next week to Birmingham, to the Patrick Eggle guitar factory. We ate lovely food, drank some champagne, got the factory tour, beautiful guitars, the smell of wood, then I played a set, and low and behold I was sent home with another!

These guitars are my babies, I’ve never gotten anything like this before, and I can tell you it was hard to save for guitars! He made my life so much better I am forever grateful.

What’s been your favourite moment as a musician so far?

Well obviously getting that electric blue guitar that’s hanging around my neck half my life is one. And at the moment my new sound and touring companion is another. It has always been hard to categorize me, and this doesn’t help when you need to market yourself. Now I feel I have a place.