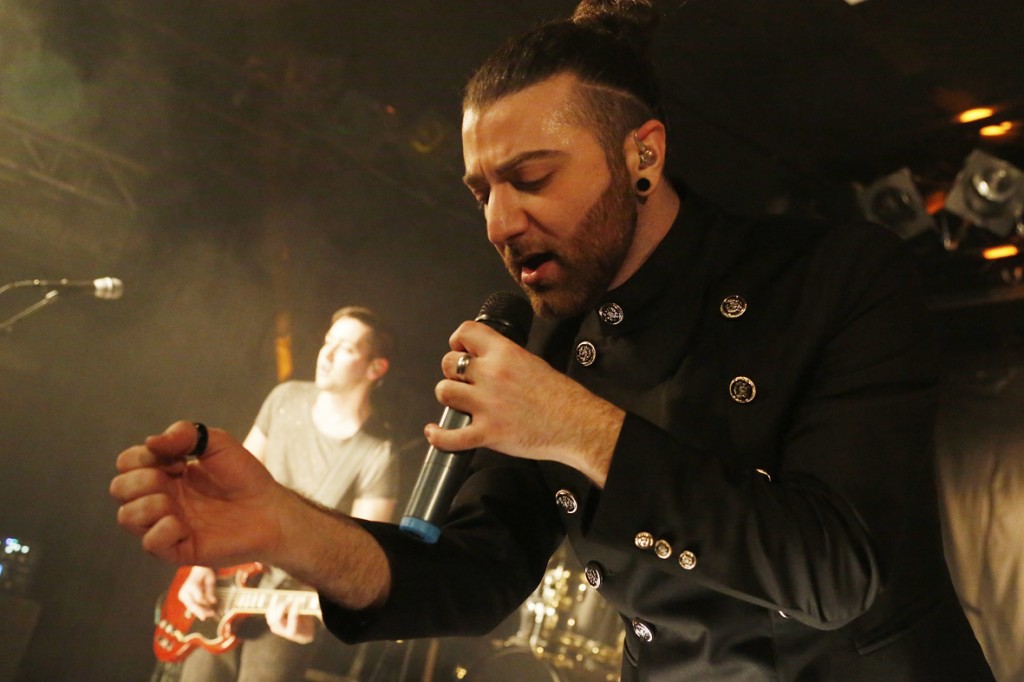 Enter Metropolis are the rarest of things these days: not only a German band singing in English, but a German band singing in English successfully enough to tour in Ireland. With the German scene having returned to its linguistic roots, the indie rockers from the west are looking at the bigger picture, looking to make waves in nearby Holland and Belgium as well as further afield. Their sound is bold and bouncy, and coming to Dublin at the end of March. Here, they tell me about the growth of the band and life in their home scene:

The German music scene is best known in Ireland for acts that are a little dated now – such as Kraftwerk, Rammstein, The Scorpions, Die Toten Hosen etc. What are things like in 2015?

Of course there is still a big progress in the German music scene and there are still big acts coming up. Bands like Silbermond, Revolverheld are quite successful, but the thing is that most of them stick to the German language. Rammstein is a phenomenon where it succeeded to catch people all over the world, and we think maybe even more than in Germany, with their music and their amazing, impressive shows without complaining about German lyrics. However we think nowadays it’s really hard to convince people abroad to listen to German lyrics. It asks much more of the listener’s time and energy to get involved in it and looking at our fast-moving and -thinking society it seems to be nearly impossible to reach the goals you have as an internationally thinking, ambitious young band this way.

That’s one argument for us to stick to our English lyrics. It’s also easier to enter the German music business with German lyrics. The last german act that reached international success was Tokio Hotel in 2008. But don’t worry, since 2012 Enter Metropolis are working very hard to change this.

How difficult is it for a German act to get into a position where you’re able to tour internationally?

It´s very hard because a German band is asked to have a fan base abroad. Either you have connections or you find a promoter that likes your music and wants to give you the chance to share the stage with a local act. This is sometimes even hard in your own country, so it is much more abroad.

The costs are also very high and artists have to pay much more on their own so the financial issue is a problem as ever.

Tell me a little bit about Enter Metropolis – what do you do, and what are your backgrounds?

Enter Metropolis has its origins in a formation called “Peachbox”. Under this name 3 of us toured over 10 years through Germany, the U.S.A. and Spain, won several German awards, played popular festivals such as “Rock am Ring” or supported big acts like “Mother’s Finest” or “Silbermond”.

With a change in the band cast the band took a creative break of 2 years to figure out a concept for this new line-up and the result of these 2 years of creative and concept work was Enter Metropolis. Everyone in this band adds his own individual creativity and style to the work-flow of the project which is quite essential for our music. We have our backgrounds in very different genres, including jazz, classical music, pop, rock, hip-hop and soul, and we think it’s this mixture of 5 guys combining their visions in creating their own music which makes up the band.
Now Enter Metropolis is an alternative rock band creating an unique sound, something big that we wanted to have a name for. Metropolis was very fitting to describe that: A fictional utopia. We wanted the listener to emerge into this sound and fictional world, and we ended up with Enter Metropolis.


How did you grow and attract a bigger audience? Is social media important? Or playing in particular cities or venues?

Both of them are important. Facebook grew a lot in the last few years and the chance to go viral with it. Online marketing became one of the most important possibilities for artists and companies to reach people and create a specific target group to get in touch with – nationally and internationally.

But playing venues where people can actually take part in something like this still didn’t lose it’s value. You can be a part of a real show and experience the music and the passion with all your senses. This is one of the reasons we love and prefer playing live. We can transport our message we want to share with our listeners eye by eye and ear by ear.

Is there a strong music scene in West Germany? How does it differ from city to city?

You have separate music scenes everywhere in Germany. Of course the cities where the big labels are based also have bigger scenes and more different genres. The main music cities in Germany are Berlin, Hamburg, Cologne, Mannheim, Frankfurt or Munich but western Germany has a strong scene as well. We also try to raise the western music scene by doing some music events with musician from all over Germany, and each of us is playing in different projects and is making music to make a living.

Which genres generally do well in Germany?

In general there is a trend that pop / indie music with German lyrics work very well in Germany. For a long time there was no German band with English lyrics. In the last few years the phenomenon “Helene Fischer” or in general the genre ”Schlager” became more and more popular and reaches more and more younger people.

What about the German music media. Is there a lot of it? Do you see a lot of local music promoted on TV, played on the radio or written about on websites?

Promotion in every kind of media is quite common. One of our songs, for example, was featured recently in a bigger TV show as background music.

There are still a few music channels especially on pay TV, but most of the young people get access to music through the radio or internet. On radios you have some formats which especially present local newcomer bands. That’s a great thing to give smaller acts the opportunity to reach a new audience via the radio. There are some internet formats as well, but they are not that popular and most of the listeners stream music via Spotify or YouTube.

How well does German-produced music compete in Germany with international acts when it comes to grabbing an audience, sales and similar?

German music and German lyrics are very popular here at the moment so you´ll always find German artists in the German hit list.

It is much more difficult to be successful in Germany as a German band with English lyrics because the trend is to sing in German at the moment. So it´s a mixture of German and international artists and music in the charts

We hear there’s an ‘Irish’ act in Germany who are very famous, called the Kelly Family. They’re not Irish, they just pretend. A friend of mine insists I tell every German person I meet that! How do Germans view the Irish music scene in general? Do you know anything about it?

Heard that name, and maybe heard one or two songs, but nothing more. People know U2 or The Cranberries… if they know they are from Ireland. Artists like Rea Garvey are well known here at the moment, not least because of his part as a juror in the German casting show called “The Voice Of Germany”. But I don´t think many people make connections between those artists and the Irish music scene. I guess the general thinking about Irish music is folk music and Irish dancing and of course WHISKEY!

How difficult do you find it turning up somewhere new and trying to make an impact? Is the first time a kind of trial?

If you step out on stage you have to be absolutely sure of what you’re doing and what you want to tell. The audience wants to be entertained and caught by your show. The goal is to have a great impact on the audience the first time they see your band, because that’s the moment which decides whether there will be a second time.

Apart from the upcoming dates in Ireland, what are your plans for 2015?

Performing as much as possible. We plan to play some German, and maybe international festivals this summer, to expand our fan base and to reach more people. Another big step will be our second album. We are in writing process since the last album and fortunately we are very creative and have a big output.

Everyone of us is writing songs and we are looking very forward recording the stuff and trying things out. This second album is very important and exciting for us because we work as a full band this time and have a clear vision where to go and how to sound.

Alternatively we would like to stay in Ireland, rock every single club in the country, meet a load of great people and find inspiration through the Irish culture…

We’ll see what is going to happen at the end of march!

Enter Metropolis play Bello Bar, Dublin on the 28th of March, with further Irish dates expected to be announced shortly.

GLOBAL SCENE ARTICLES: Seoul (From The Airport), Stockholm (The Glade).