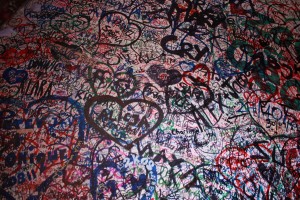 “Giulietta, Guilietta I’m here” holler passing groups of tourists, eyeing the balcony of Casa di Giulietta, Juliet’s House, from the marble streets of Verona’s Via Cappello early on a Saturday evening. Some stop outside, pasting tiny, heart-covered notes to a fictitious lover with chewing gum to the surrounding walls. During the day, others scribble messages across the tunnel leading to Juliet’s courtyard, emotions unveiled in rough-hewn graffiti that’s torn down every few months to present a blank canvas, and provide the most hardened of souvenir hunters with a small clump of the legend to take home.

Verona seems besotted by the ancient local fable immortalized in Shakespeare’s classic. The city also hosts Giulietta’s tomb (empty), her clothing (generic outfits of the period), Romeo’s house and the popular ‘Club di Giulietta’, whose activities include ‘delivering’ letters to the mythical teenager. There’s a daft element to it, but the lovelorn indulgence rubs off. In the central Piazza delle Erbe endless streams of couples drift hand in hand below towering statues and ivy-draped balconies. The cafes spill out across squares, their espresso and cherry-tinged Valpolicella – wine grown and blended in vineyards surrounding the city – adding to the wafts of bakeries, parmesan and chocolate that flavour the streets. 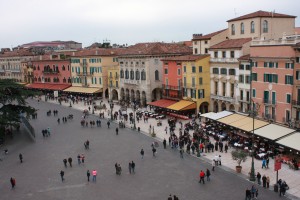 It’s not Verona’s sights that charm the most, but its atmosphere. Having visited the moderately impressive Roman Arena, explored the fading frescos of the dozens of Romansque churches and climbed the 368 steps to listen to the bells clang and examine fragile rooftops from Lamberti Tower, a pianist stops us in our tracks. He takes his place in a quiet corner, surrounds himself with cushioned hearts and closes his eyes, playing Beethoven from memory while an enraptured crowd gathers around him. A touching moment, in a city seemingly built for lovers it’s not a once-off.

Later, we duck into the tiny alleyways and fairy tale courtyards. These reclusive areas offer quiet contemplation next to the sensual buzz of a city that, in parts, seems to decay elegantly around us. On buildings that cling to their glory regardless, the flaking and fading are hard to miss, but match the unchanged aesthetic of a city that stubbornly refuses to blight its image with mismatched modernity. Around an unpromising corner, we stumble upon Ristorante Greppia, where we turn down the fried calf’s brain in favour of delicately flavoured pastas then horse meat, air-dried and served in tiny strands specked with parmesan. 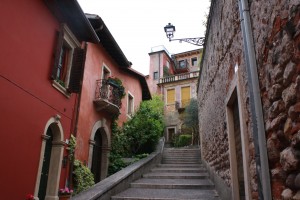 Verona’s a small city, and with most of its Roman-influenced charm condensed around the ancient natural protection of a single loop of the Adige River, it takes only a couple of days to see – and indulge – fairly thoroughly. Just fifteen minutes away by train, the idyllic town of Peschiera Del Garda is shielded by towering walls dropping into countless Lake Garda inlets. Bridges across patches of translucent green water lead to lake-front coffee shops and pizzerias serving calzone (folded pizza) re-shaped as a crab or squid. A little further afield, Maranello’s Museo De Ferrari – around two hours by train and bus – is a shiny ode to Formula 1 glories and slick, noisy roadsters, topped off gloriously with fifteen minutes behind the wheel of an F40 from an enterprising local hire centre, worth even a pricey fifty euro.

Back in the city, a lucky few sleep in Giulietta’s house, while others scrawl their names on padlocks and ‘lock up their love’, symbolically launching the keys from the city’s old drawbridge as they depart. Legend brought them here, but it’s the ivy clinging up the aging, decorative facades of Verona’s balconies; the moonlight glancing off the occupants wine glasses; the Lotharios strumming quiet refrains; the flower-strewn courtyards hiding amongst the marble… Verona itself that the fantasy and reality into one. 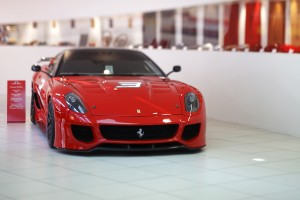 STAY The Accademia Hotel will keep the romance flowing, with classic décor and plenty of in-house luxury. Ad Centrum B&B, conveniently positioned just across the river from Verona’s core, offers a more affordable yet amiable alternative.

INDULGE In an out-of-place but unforgettable Segway tour around the city’s heart, or by taking a herbal bath and jacuzzi at the San Marco Hotel on Via Longhena.

As published in the Sunday Business Post ‘Travel’ supplement, May 2012.