From sea salt ice cream to lock-ins with world class musicians, there’s far more to Dingle’s Other Voices than even RTE’s well-trained cameras can capture…

In ten years of eclectic music that’s been touching and intense, refined and genre-spanning, Dingle music festival and RTE series Other Voices has offered up a succession of sublime church recordings from world class musicians, all against a fairy-tale backdrop. The format is beguiling: superstars strumming guitars in harbour view houses; a tiny church audience rising as one from their pews to acclaim another spellbinding session; chats with inspired, thoughtful heroes introduced by kids from the comfort of their kitchen.

Since series one, recorded in 2002, Other Voices has fostered a near-faultless reputation for punching well above its weight. On-screen stars have included a problem-free Amy Winehouse, Elbow just months before they rocketed to stardom, Florence Welch unveiling the power of that voice in a confined country corner and Snow Patrol mellowing to a touching musical slumber. The local musical elements are all in place, too, in the single-track televised snippets of artists like Kerry natives Toy Soldier and Cork’s Fred playing the petite IMRO Other Room, or young Dubs Little Green Cars, who hit this year’s jackpot as the least-established Irish act to be welcomed into the privileged bosom of St James’ Church itself.

Away from the coloured hearts and rapturous reception depicted so stunningly on our TV screens, though, this most-significant of micro-festivals has become so much more. Beyond the grateful few – just over 300 over the course of four days – who actually make it to the main event, Dingle’s annual highlight has a hardcore, non-ticketed following that attends in part in the hope of grabbing a last-minute pass, but also, more than that, for just a taste of a truly reverential atmosphere. 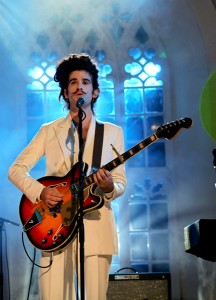 During Other Voices, Dingle is positively otherworldly. With the main event occupying no more than the late evening of any given day, the pubs become star-hunting havens and social equalisers. This year’s festival newcomer, the ‘Music Trail’ sees many of those smaller acts (and a few of the bigger ones – not least The Frames and Mick Flannery) entertain with free gigs in cramped corners. The result is a form of a pub crawl, one with acclaimed musicians making up the numbers. There’s a point of the weekend when we find ourselves tucking into the Guinness while member of Meath band Ham Sandwich and Dubliners We Cut Corners swap Buckfast consumption stories. Later the same evening, Wild Beasts – a band that are fast reaching levels of indie-acclaim that border on adoration – can be found happily propping up the Benner’s Hotel bar chattering away about buffet breakfasts. Not content with mesmerizing the church. Lisa Hannigan and Mick Flannery take on the Benner’s back-bar piano and wow the late-night revellers in a spontaneous 2am collaboration. At the other extreme, acoustic soloists (at least for Other Voices) Ben Howard and Frank Turner are barely in Dingle for long enough to record, having dropped in during brief, hectic mid-tour breaks, but both take time out of their set to rave incessantly about their brief insight into the town’s charms. Visiting reviewer Elaine Buckey sums up nicely: “World-class musicians mingle with locals and tourists – there’s little room for airs and graces in Dingle over Other Voices weekend.”

While Other Voices propels Dingle’s charm levels into the stratosphere, there’s plenty of other allure, too. Other Voices coincides with another Dingle festival, the Festival Of Light, which sees a parade of local children march around town clutching sculpted lanterns and led by the Dingle Fife And Drum. The mornings are more about a late Full Irish, a little light star-spotting or an intoxicating spell soaking up the sublime stench of the local cheese shop. The clearing of the morning’s hefty fog reveals a town seemingly, somehow, altered less by the passage of time; steeped in the same history as its moist, mossy landscape, and for those without transport, tracking down a ride round the peninsula ring road to eye the rain-lashed outer islands becomes high priority. 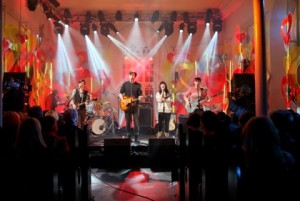 A circular stroll through the city centre takes you through pubs strewn with local paraphernalia, from GAA triumphs to assorted rustic instrumentation, many doubling up with second businesses in that endearing rural-Irish quirk that visiting bands so love. Dingle’s include a hardware shop, a clothes store straight from the 80s and a bike hire place; each home just once a year to assorted, Guinness-supping artists of serious repute. When the breeze breaks, Murphy’s Ice Cream smashes the mould with brown bread and sea salt flavours alongside the strawberry and vanilla (both are far better than they sound). They make the perfect accompaniment to the must-do pilgrimage out into the harbour to catch a cobweb-shaking breeze and float alongside lazy resident dolphin Funghi. Owner of growing Dublin record label Delphi, Alexis Vokos, seems almost in awe: “It’s a fairytale world of warm pubs, familiar faces and amazing artists who have all, seemingly by magic, arrived in this picture-perfect corner of Ireland and happily surrendered to its warm embrace. Part of the pleasure is just how informal it has remained.”

What does make the TV screens, then, is the essence of Other Voices. The Frames regular return is just another example of Glen Hansard – an Other Voices co-founder – playing his role as an exceptional ambassador for Irish music. His footsteps must already be marked by some of the intense talent getting by far its most significant TV airing to date – the likes of We Cut Corners and Little Green Cars can be expected to play a prominent role in the continuation of Irish music’s enviable legend. It’s arguably the festival’s imported acts, though, that give it such sustained credibility.

The range of performers unveiled annually is key: seeing exceptional recovered stroke victim Edwyn Collins lined up alongside psychedelic legends Spiritualized and hyped dubstep newcomer SBTRKT puts every act on an equal, enticing footing. The set-up is simplicity itself, but also brings out sparks of creative brilliance, and seems to encourage musical discourse that comes out in the festivals annual array of one-off collaborations. The bigger stories remain in the likes of The National, Winehouse, Snow Patrol and Ray Davies playing some of the most intimate shows since they rose to fame. For those who head out west, though, it’s their own personal, unique little slice of the legend that makes Other Voices quite so magical.

As published in the Something For The Weekend Supplement of the Irish Sun, February 27th 2012. Photos by James Goulden. 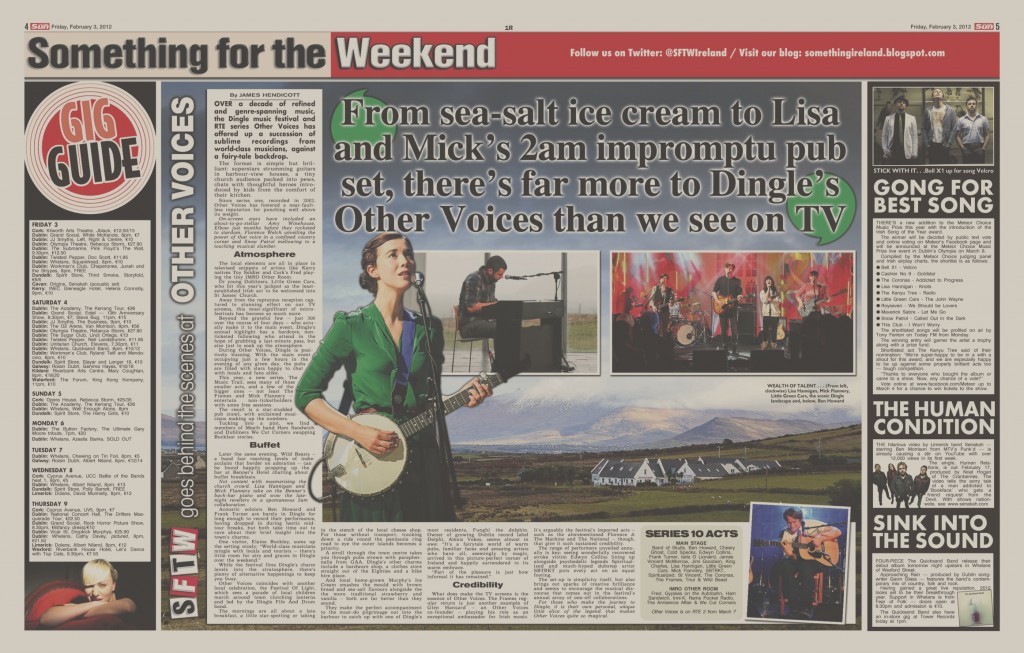