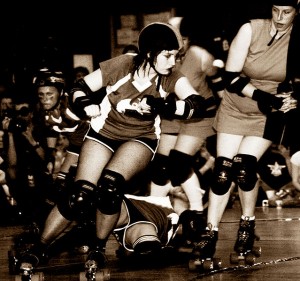 It might sound complex, but Hannahbolic enthusiastically touts the skill requirement as “none” – none of the girls come from skating backgrounds – yet the training can be intense. Cleaver explains: “everyone comes at it from different levels. You’ll have some people who are really quite athletic when they join, but there are people who’ve never done a team sports in their lives. We’ll teach people everything they need to know”. On the other hand, the physical demands are not to be sniffed at, with training becoming increasingly intensive: “It’s very physical”, Hannah explains, “We train three times a week, and it was four times over the summer. You need to be working out on the days you’re not skating, too, so that training sessions are just for the skill element. It’s a struggle, and we wouldn’t make anyone do more than they’re comfortable with, but we’re a competitive league, so if people want to get first picks they need to put in the work.” As for the physical side of the bouts themselves, Hannahbolic explains “There are several members of our team, and other teams as well, that could put you on the floor pretty easily, but Roller Derby’s moved on from that. It’s more beneficial to get in someone’s lap and feel where they’re going to go, and block them. There are big hits, but it’s more tactical than just slamming people”. Physical, yes, but roller derby’s also accessible for newcomers, particularly now. The sport’s so new to Northern Ireland that none of the girls have more than 18 months experience, yet an All-Ireland team recently went out to represent the country in ‘Blood and Thunder’, the American-based Roller Derby World Cup, and things are a little further on in Dublin and Cork. The members of the Belfast team are either ineligible or not quite experienced enough to make the side this time around.

As an amateur sport with a DIY ethos – “There’s a real community spirit, we’ve been places and stayed with other teams, and we’ll offer the same if they come here.” – derby has a fierce identity, not least in its dress code. “The make-up and costumes help me compartmentalise the nerves”, Hannah argues, while Cleaver sees it as “a bit like playing superheroes. That’s why you see all the pants on the outside.”

It all looks great on track. Tonight’s bout is an ‘intra-league’ contest, consisting entirely of members of Belfast’s own team, but no less intense for it. A crowd of around 250 watch the girls shoulder-charge, skip around each other and fly past in a blur of intimidating make-up over the course of two halves, a punk, rock and metal soundtrack offering appropriate backing music. The most striking thing is perhaps the speed of the jammers, who, once they escape the bustling pack, invariably fly around the circuit in seconds to line up another run through. As Belfast Roller derby play ‘flat track’ (i.e. not banked) roller derby, the trips and falls tend to end in slides out towards the crowd, while points scoring varies wildly between bouts, with particularly speedy skaters like ‘Puscifer’ racking up the scores lap after lap, while intelligent blocking leaves others stranded in dense packs. 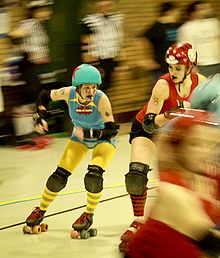 While the opening jams feel a little like the girls testing the water, the full tactical range of the game really starts to come out towards the end of the opening half. With the league, divided into black and white team colours for tonight, they demonstrate the full physical and tactical intensity of the sport in a night that offers a triumphant example of a concept that’s new to almost all of us. Just the level of sin bins, and the new tactical options that are opened up by the intelligent “no harm, no foul” refereeing is a must-see, offering extreme ‘power jam’ options.

The long-term aim, as Cleaver tells it, is “basically to grow. It would be great to get an all-Ireland tournament. In the short term, we just want to get to the point where we can play a lot of other teams.” There are a growing number of options, with the sport quickly taking off across numerous continents. The London RollerGirls for example, has already reached a level that allows them to compete in the American championship. With a number of breathtakingly fast jammers and physical, swift blockers, Belfast’s first public outing looks very much like a first step onto a global scene.