How a business owner in small town America became an artistic philosopher, and owner of one of the biggest private blogs in the world…

Frank Warren is an artist, yet he doesn’t produce any art. He’s a popular public speaker, yet most of the stories he presents are not his own. He’s also something of a guru: a man who listens to others’ problems on a daily basis, and does so without judgment. Every week, he’s contacted by the abused and their abusers; the suicidal and the murderous. Over the last few years, he’s heard from thousands of cheating spouses, hundreds of sexual deviants, priests who don’t believe in God and someone who fed a container of bleach to their cat. Despite all of the above contacting Frank personally and specifically, he has absolutely no idea who any of these people are. 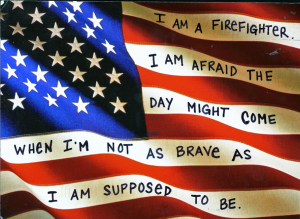 The early moves towards what would become ‘Post Secret’ could almost be classified as spam. A selection of self-addressed postcards asking strangers to submit anonymous secrets started out as a one-off art project, and drew a response of around 3%. That was more than enough for an art exhibit, which was eventually transferred to Frank’s website, PostSecret.com. Between that inauspicious start in 2005 and the present day, Frank’s been handing out his home address online, and has received more than a million postcards, every one of which he reads and keeps. He sees his hobby as a valuable insight into the human psyche. In a sense, he’s like a modern day agony uncle, except without any hint of judgment along the way. The sole purpose is to get the ideas off your chest, anonymously, yet also in a way that exposes your thoughts and actions to the general public.

Five years after its start, PostSecret has now produced seven books (including books on love, confession, death and God), achieved a staggering total of approaching half a billion web hits, and become Frank’s full time job. He also hosts associated events, which usually take place in university amphitheatres, where Frank explains the philosophy of his artistic endeavors and then hears a selection of secrets from members of the audience. It’s all a far cry from his old day job, running a small systems information business. 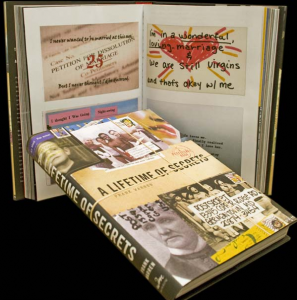 The heart of the product, though, lies in the Sunday-updates of one of the world’s most popular private blogs. Frank creates the stories from his weekly mail, weaving together a dozen to two dozen postcards that speak to each other: “They’re funny, sexual, tragic, hopeful, philosophical and spiritual, and I try to arrange them in a way that connects them, almost like a conversation is happening between these anonymous secrets”, he tells us. That’s where the artistic side comes in. While some postcards go straight on the site, others are saved for weeks in order to create a flowing tale; a collection of symbolic and anonymous story-art that weaves a floating picture around itself. Frank explains: “I spend hours selecting the postcards. I think of myself a little like a film editor, taking these scenes from people’s lives and knitting them together to tell a coherent stories we can all relate to”. Some of the ‘tales’ lead viewers to highly contemplative Sundays.

Of course, such a project’s not going to pass without controversy. Frank tells us “many secrets are secret for a reason. They can be offensive, politically incorrect, involve nudity… sometimes the best secrets can make us very uncomfortable. The FBI has contacted me on several occasions”. At the time of writing, Frank was embroiled in a censorship battle, trying to follow his heart in deciding whether or not to display a postcard that featured the sacred underwear of Mormons. Such a dilemma is not an atypical result of a week’s offerings.

On the more light-hearted end of the spectrum, another sender confesses to not wanting children in order to avoid more visits from the in-laws. A third postcard reads “my husbands thinks I’m a drunk after binging on wine. Actually, I binge on wine to make my bulimia easier to bear. I don’t know which is worse”. At a recent PostSecret event, a female audience member offered up this gem: “When I was visiting my grandmother recently, I went through her draws when she was out. I found an antique vibrator. Yes, I used it”. These might all seem unusual confessions, but Frank’s heard dozens that are similar. 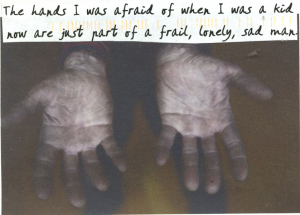 One of the most striking aspects of the postcard collection is the level of artistic talent. Very few of the submissions fail to reach at least a modicum of an impressive aesthetic, a result Frank put down to this: “So many of us are artistically talented, but it might only come out when we reveals vulnerable parts of ourselves that allow it to do so”. It’s something Frank can relate to: “This project found me. I’m an accidental artist, in that I don’t have any artistic training. I’ve had to adapt, become the kind of person who can read these secrets daily, year after year after year.”

The project, unsurprisingly, has changed Frank for good, though he argues that the postcards are so important that he doesn’t mind the knock on effect. He does his best to channel the project output, focusing on gaining the trust of viewers and those who submit. Despite huge numbers of hits, the only link to appear on a website to date is promoting a suicide prevention charity. “It’s important to me that I’ve never taken a dollar for paid advertizing. I feel very fortunate that strangers trust me with their secrets. I don’t want to do anything to mess that up, and advertizing might feel like exploitation. I try to be very personal. For the same reason I use my home address, not a PO Box, and I don’t offer any comment on the secrets I post. I need to protect what’s special about it. If I can do that, things can keep going indefinitely. It’s not always easy. I’m a little like eternal stranger on a train, and people feel they can pass things on to me that they might not tell someone they’re closer to”. While there are many ways of appearing anonymous online, few are so thought provoking, or inspire such a sense of community.

If you’re in need of a stranger on a train, or just want to get something off your chest that’s not made for the ears of even those you don’t know, Frank might just be your man. If not, he’ll certainly offer you a glance into the depth of the human psyche that’s profound, heart wrenching, entertaining and at times palpably disturbing, in simple postcard form, one week at a time. How many will you relate to?