“We’ve been watching you all day, and we were just wondering what you’re doing spending ten hours outside a phone box?” To an outsider, clearly my Saturday spent standing on a Dublin street corner looked every bit like a particularly dubious kind of business deal. So much so, in fact, that it took a flash of last month’s Phone Box Experiment article and a few awkward explanations to avoid a premature end bought on by Garda and the use of ‘loitering’ legislation. That one hairy moment aside, though, our ten hours of phone-themed shenanigans went perfectly to plan. 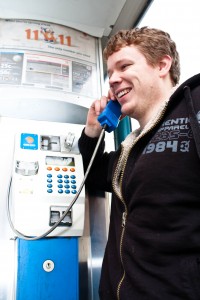 The idea of camping out next to a phone box has its roots in one of the Internet’s earliest urban legends, the Mojave Phone Box. Our own chief influence was a Skype marketing campaign we wrote about last month, fronted by an actor called Rob Cavazos. Having set a our phone-focused day as a (thankfully sunny) Saturday, we started to promote it through a Facebook group, Twitter campaign and the AU forums a mere 72 hours before answering our first call. In no time I found myself chatting about the experiment on two radio stations and controlling a semi-viral Facebook group.

On the day, things started slowly. Only two hung-over calls from the UK and one drunken one from Perth, Western Australia arrived early in the morning, before the comic side of things really kicked off. First up was a Belfast lad with a slightly unhealthy fixation with my sexuality. Several callers pretended to be snipers in the film Phone Booth, but fell through when they couldn’t tell me what I was wearing (a big thanks to the blog that compared me to Colin Farrell, by the way) and another challenged me to persuade passers buy to clamber into the box with me (one way to guarantee some very strange looks).

Funny fakes turned up around every corner. A tweet mentioning a nearby dog prompted several calls asking for it to be returned. One ‘old woman’ called to ask after her friend, and seemed genuinely peeved when she couldn’t find her; I eventually told her that Doris had died (I really hope that wasn’t real). A French lady from Tuam even came up with a challenge: think of twenty things that might have happened in the phone box in the past, a task that lead to some truly unnecessary thoughts and a handful of explanatory sketches. 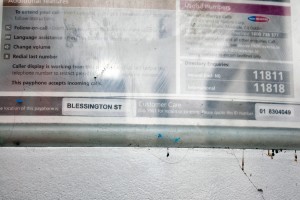 Dave introduced me to the concept of ‘Sexy Crotch Dancing’ (it sounds genuinely repulsive) and played a quick melodica solo down the phone. A gay Californian hot air balloon pilot living in Paris (he wasn’t even joking, I checked his website) gave me a quick history of hot air balloon tourism and a skeptical take on Parisian life, before an adorable nine-year-old girl came on full of the joys of Cyprus. One young lady even offered to cook me lasagna and stir fry, and deliver it to my ‘home’. Creepy.

There were a few ongoing challenges. One was to try and find me, which only the pharmaceutical folk and a few bikers actually managed (Blessington Street, North Dublin, in case anyone’s still curious!), while the early call from Perth pipped Ho Chi Minh City and Seoul for the long distance prize. There was another Australian, too, but he was too drunk to give his location. Late on, I was christened a ‘phone slag’, and spent the final two hours talking so solidly that the phone rang the second I hung up. My main discovery? That given something really ridiculous to do, plenty of people get into the spirit of it and play along. Some are really original, some just want to know what on earth you’re doing, and most can find plenty to say to a total stranger. Unless they’re the other side of the world and calling at closing time, that is. 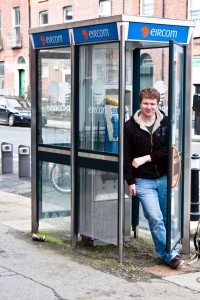 Every challenge needs its crowning moment, and mine came when Korean electro-pop band ‘We Need Surgery’ popped up as my very last call. Since I lived in Seoul, the funky keyboard rockers have been a fixation of mine, and their call came at 4am Korean time, and also marked the final day recording their debut album. It’s been nearly three years in the making. The promise of an early copy secured, 7pm – the ten hours mark – came round, and as I walked away I heard that phone ring just one last time. It’s been haunting my dreams ever since.

Calls from 3 different bands – Ambiance Affair, Checker Board and We Need Surgery.

Number of people who think a friend is dead as a result of the experiment: 1.