The end of an era in the Dublin DIY gig scene

“Yesterday I went in to tell my elderly next door neighbour that I’d be having another gig in the house. She asked me if I needed any chairs.”

Four years after he first opened up an unassuming Dublin semi to nights of DIY gig madness, The Hideaway House’s 20-year-old promoter Dylan Haskins is calling it quits and moving on. AU went along to the last ever gig – the line-up a tantalising secret – for a chat with Dylan, and to savour the place before it’s gone forever.

When AU rocks up outside a shabby suburban semi in Blackrock, South Dublin , there’s already a festival-like, summer sunshine vibe doing the rounds. Spiky-haired punks and flowery hippies drift about sharing nods and winks, whispering about possibilities for tonight’s secret line-up and sharing information on just how to track down a venue that’s something of a Dublin urban myth. It’s a Monday night, we’re 40 minutes from the Liffey and we have no idea who we’ve come out to see. This, according to founder Dylan Haskin, is life. “When you’re involved in a music scene for long enough, you experience these rare moments of raw passion and get this feeling, an affirmation that this is what it’s all about”. Welcome to The Hideaway House.

When Dylan founded the venue, he was a motivated 16-year-old with impressive DIY-gig credentials, and the Blackrock venue was nothing more than a pointedly un-renovated semi set conveniently beside a bus stop. These days, the downstairs rooms are empty but for gig posters and discarded musical instruments sat against one wall, while the entrance has transformed into a tiny ticket booth, where a fiver buys entry for you and as much beer as you can carry. Out in the sunny back garden, punters wander amongst the musicians, playing the ‘who’s who’ game in trying to work out exactly who it is they’ve paid to spend their Monday night watching. This particular Hideaway House gig – having been moved outside to the garage due to the impressive turn-out – is as close as most of us will ever get to watching big name musicians play in our back yards. “The DIY ethic is a fundamental cornerstone of any music scene,” Haskins argues, and having never paid himself for running a gig, it’s a philosophy he lives by. 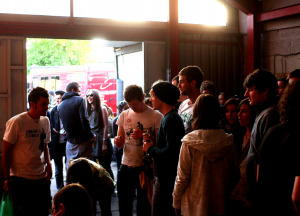 Listening to Dylan describe earlier shows, we get a sense of the utter chaos that often rules here. “The ceiling is abnormally low in the gig room, which makes any form of crowd-surfing physically impossible, yet some gigs seem to have defied the laws of physics,” he explains. “During the one gig Colin Skehan (of Adebisi Shank song title fame) somehow managed to float from the crowd, over Adebisi Shank and out the tiny window behind them. He’s not a small lad. Looking at the window, I’ve no idea how it happened.” There’ve been more touching moments, too. “At the Calvin Johnson gig, he led the crowd from the gig room in a line like the Pied Piper, through the then jungle of a back garden, whereupon he began playing under a mass of overgrown ivy.” Some things could only happen in such a inimitable location.

Most of the acts at tonight’s finale play in a garage, stood on a mucky carpet as the crowd drifts in and out, replacing their cans and catching up with friends in a circle on the back lawn. Dublin rockers Jogging open with a set of lairy angst, before Logikparty entertain a dancing five-year-old – and everyone else – with their Courtney Love-influenced shenanigans. AU must admit to a childish ‘whoop’ when we spot Belfast’s own post-rock stalwarts And So I Watch You From Afar wandering around: the four-piece are tiring just to watch, and seeing them playing to the 200-plus who’ve made it this evening (topping a previous record of “128.4”) is the kind of sweaty bonanza you don’t forget in a hurry. 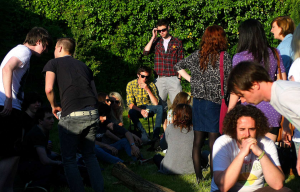 Dylan tells us this is far from atypical. “The intimate atmosphere and excitement during the gigs is incredible. In the past, I remember holding the speaker during entire sets as it rocked back and forth. You often couldn’t really tell the band apart from the audience.” Tonight’s highlight sits perfectly with the ‘away from the hype’ ethos: local punk starlets ‘ Find A Way’, playing their final show and their fourth at the house, steal everyone’s thunder.

Find A Way’s set might contain the odd cheesy Blink-182 cover, but to Hideaway House regulars the band represent everything the venue stands for. Dylan argues that the DIY attitude brings its own rewards. “The bands play lots of gigs, have lots of fun and do it for those reasons alone,” he says. “None of the bands I’ve ever dealt with within the local scene were ever trying to ‘get signed’.” Find A Way, for example – relative unknowns outside of Blackrock – can hand off the mic to a member of the audience and spend an entire song crowdsurfing. For them, like many of the other Hideaway House regulars, this audience forms the core of their fans. “Last time they played the house, there was blood on the ceiling from people’s knuckles,” we’re told. It’s not difficult to believe. 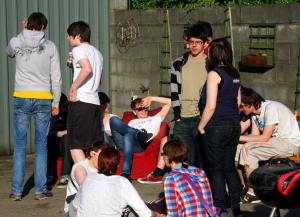 You might expect a few complaints from the natives with such a raucous show going off next door, but that’s not how things have turned out. “Yesterday I went in to tell my elderly next door neighbour that I’d be having another gig in the house,” Dylan tells us. “I braced myself and told her there would be a lot of people coming. She asked me if I needed any chairs.” Not only are the neighbours impressively accepting, Dylan is certain that his late father – from whom he inherited the house – would have approved too. “I think my Dad would have loved it,” he says. “Not necessarily the music, but the idea of it.”

Of course, not all of Hideaway’s performers have remained ‘back garden’ bands. The biggest success story is Heathers, the Blackrock sisters who sweetened the house with their harmonies early in their career, and went on to provide the backdrop to the latest Irish Tourism advert. Tonight they’re back to close the venue for good, playing a delicate acoustic set resplendent with off-key sing-along moments as the last glimmer of sunlight disappears over the garden hedge. The duo released their earliest recordings on the Hideaway Records label, so nothing could be more apt. 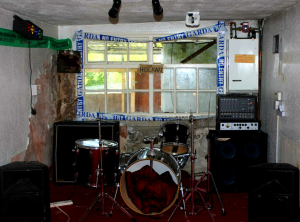 Closing with an array of old-timers and local stars, Hideaway House’s final show may well have been its greatest, but even the best things have to end. After four years of unique and energetic shows, Dylan will be focusing his efforts on pastures new such as his new, not-for-profit, all-ages Temple Bar venue, Exchange Dublin. “I can trace the stages in my life right back to the house,” he says. “I was asked to review music on a new show called Two Tube on RTE Two last September, which I’m assuming was as a result of being heard talking about something related to the house or label on the radio or in the paper. I took the job and then three months later I was asked to present the show. Life is weird.” In amongst his towering achievements, it’s easy to forget that Dylan is still of an age – 20 – at which most of us considered starting you own business at best a distant dream.

For all his practical endeavours, though, it would be wrong to paint Haskins as anything but a committed music lover. His energetic dive from the speaker stack during Find A Way’s set has left him with a suspected cracked rib to go with the happy memories, a fitting tribute to the heartfelt energy that has gone into the venue over the years. Its beer and Buckfast-stained carpets and shambolic back garden will return to life as a standard semi-detached in a quiet, pricey suburb. And the punters? We’ll just have to cling to the cheap, messy memories of a teenage rock fan’s wet dream come true.

HIDEAWAY HOUSE: HOW IT HAPPENED

2005 – 15-year-old Dylan Haskins is part of the Basta! Youth Collective, organising shows all over Dublin.

2006 – Dylan inherits a Blackrock house from his father, and proceeds to turns it into a gig venue. The venue is promoted mainly through word of mouth, and quickly starts to draw crowds of more than 100 for intimate ‘front room’ shows.

2006-2009 – A stream of well-known Irish acts grace Dylan’s front room, back room, and anywhere else he happens to feel inclined to direct them. These include Heathers, Patrick Kelleher, Adebisi Shank, Hooray For Humans and You’re Only Massive.

Fox Jaw: “bands need to learn, nobody is going to do it for you”

Fakenamé: “I’m still working out exactly what Fakenamé will sound like”

Sion Hill: “It is difficult finding our place in the world, it’s easy to feel lost and unsure if we are on the right path”