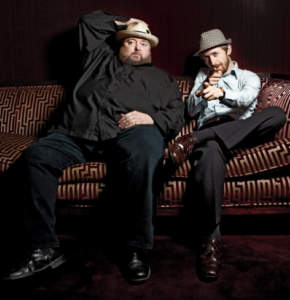 Neil Hannon and Thomas Walsh are eight hours into one of those intense, ‘get it out of the way’ media days that artists must dread. Their mannerisms, unsurprisingly, are a touch worn, with Hannon occasionally pausing to eye his coffee cup or mentally navigate the pattern on the nearby couch. If we didn’t know better, we’d say the duo are a touch bored. It’s not an impression that lasts: like their quirky band, the poetic twosome seems incapable of taking life too seriously. As State soon discovers, a single question can lead the pair on a journey of pure tangent-strewn ridiculousness, such as a five-minute conversation incorporating the possibilities of using London’s ‘gherkin’ building as giant Kerplunk board, or how the Foo Fighters production techniques relate to our dodgy laptop-based dictaphone.

The chemistry between Hannon and Walsh fizzles. ‘Not a lot of our ideas come to us when we’re drunk. Just the ones based on cricket,’ is Hannon’s explanation for the background of the band, admitting that ‘most people would agree it’s both a funny and a stupid idea to make an album about cricket, but most people wouldn’t actually do it’. Walsh is not far behind: ‘I woke up the next day with a funny taste in my mouth. We definitely sort of talked about it before that night. It’s impossible to put a finger on who said it first. We did do a track called ‘Candy Floss’, which became a track called ‘Pedalo’ (the secret track on the Duckworth Lewis Method album), ‘We were trying to give it to Kylie, because obvious Neil gets asked that kind of stuff a lot’.

‘I often hear that such and such is looking for songs from the publishers’ Neil explains, brushing off the unlikely background to the album’s bonus track. ‘I mean it’s not like they’re literally knocking on your door, you just write it and hope for the best’. The track turned out to be the pair’s first true collaboration, with Walsh adding ‘some silly space dust lyrics’. Kylie didn’t take the song, so Walsh ‘threw some cricket lyrics in for a joke’. The rest, as they say, is history. Not that Hannon remembers it’: ‘I don’t recall that at all, but I’m not surprised. We weren’t planning on making an album together anyway’, he explains, ‘We were just planning on making heaps of cash selling pop songs. But it didn’t work’.

The cricket theme, though, clearly did work. From a single song, the duo developed an EP. A few days later, there were too many songs for that, too, so they readjusted their aims to ‘A few funny songs to put on the Internet’. But then the songs really started working. ‘It was a great moment,’ Walsh recalls, ‘We have different styles. Neil gets up early and acts like a real musician. I get in at four in the morning drunk. There was always a window of like four hours when we could work together’. One four-hour session pushed their -just for fun’ project over the edge: ‘It was the drunken recording I turned up with on my mobile,’ Walsh jokes.

Hannon’s work ethic comes across as bordering on obsessive. Having just released a new album under his ‘Divine Comedy’ guise, is already back on Duckworth Lewis Method duty. His studio contains a board, on which you’ll find ideas relating to his musical Swallows and Amazons, tracks from Bang Goes the Knighthood (The Divine Comedy’s latest), The Duckworth Lewis Method and The German Cancer Opera (which Hannon describes as ‘a weird theatre piece I was asked to do by a German’; he’s still waiting’). Both Hannon and Walsh love the creative side of the board – ‘it stops you from getting bored, working on a lot of things at once’ – though Hannon’s creative agenda shines through, too: he also loves wiping things off when he finishes them. 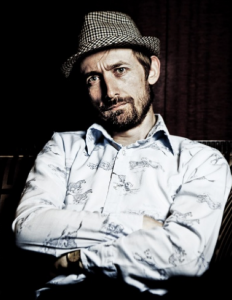 It seems that despite the packed schedule, Duckworth Lewis Method might not be a one-album thing, though Walsh’s ambiguous gesture and semi-serious comment in response to our quizzing (‘It’s coming, there it is over there’) is a touch non-committal. It it does arrive, a new album certainly won’t veer away from cricket: ‘The name pretty much prohibits us writing about anything else’, Hannon argues, ‘though it could be about complete surreality’. At this point Walsh quietens the Divine Comedy man: ‘You’re giving it away there Neil’. Given that the brilliantly surreal ‘Jiggery Pokery’ is a song about around five seconds of cricket (admittedly a fairly famous five seconds), the potential for new material is ample, and they’ll have a new Ashes series to help. Judging by the guarded smiles passing between the two, we’re optimistic to say the least.

With this particular pair, being in the least bit guarded seems unnatural. In interview, you’re only ever thirty seconds from the most random of conversations. Losing concentration for a few seconds after a day of questions, Hannon zones back in to find Walsh discussing the possibility of turning the London Eye into a bridge. That, in turn, somehow leads into a French game that involves chucking huge steel balls down a road, but is not boules. We’re confused, but the sparkles of creativity are obvious, as is the inarguable edge of charisma that led to actually producing an album on what must be one of the world’s least sung-about subjects (‘even lobotomies feature heavily on a number of punk albums’). In another moment or pure “surreality”, Walsh follows our questions on ‘Jiggery Pokery’ by informing us ‘I once had sex in seven seconds. Well it might have been eight, but I think it was seven seconds. Plenty of people write songs about that. It’s more than enough material’. Indeed.

The return of Duckworth Lewis Method this summer is odd timing in some ways. With Bang Goes The Knighthood less than two months old, Hannon still finds himself performing at the Olympia under his other guise. ‘This always was a summer project,’ he explains, ‘it’s like having a holiday home. But it is exhausting. It’s not really a side project anymore. If Duckworth Lewis became the next U2 and The Divine Comedy became a side project I’d be fine with that. You don’t really think in those terms anyway. You just kind of do what ‘it’ wants you to do. If we were offered one hundred thousand Australian Dollars to play there, we’d do it’. Given the Australian’s love of cricket, it might be only the volume of cash that’s missing.

Hannon and Walsh do have their memorabilia, though: ‘We do have a lovely letter from Duckworth and Lewis somewhere. It was very nice, especially as we didn’t actually ask to use their names. We thought they might be a bit upset and hunt us down. We’d be more scared of Duckworth really, he’s the angry looking one. No, they were lovely. They do a lot of after dinner speaking about “the method”, the mathematical method that it is. We’d love that. I’m sure they put an interesting spin on it, if you’ll pardon the pun.’ Puns are clearly part of Hannon’s lifestyle: ‘When the first incarnation of The Divine Comedy broke up, I seriously considered calling myself “Armitage Shanks” he throws in. Right.

For all their joking, this is about music not cricket. Hannon describes the sport as ‘a waste of time that I love’, while Walsh argues ‘I could as soon leave it off as turn it on, though I am obsessed with the 20-20′. We’d be more convinced if the following five minutes didn’t revolve around Ireland as a test match nation, the woes of the Bangladeshi side and a brief aside into Liverpool’s recent signing of Joe Cole: Duckworth Lewis Method are obsessed with the intricacies of this highly un-Irish sport. How else would they squeeze in lines as imaginative as ‘Robbery muggery Aussie skulduggery out for a buggering duck’ into their lyrics? Now, about Shane Warne…

As published in State Magazine, July 2010, photos by James Goulden.

You can listen to The Duckworth lewis Method’s self-titled album by clicking the picture below: 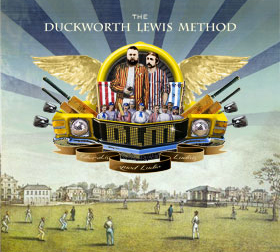 Thom Southern: “It’s been a constant feeling of ‘up in the air’ but it keeps things fresh”